You are here: Home / Got the Blues. Plumbago, Malta’s June flower. 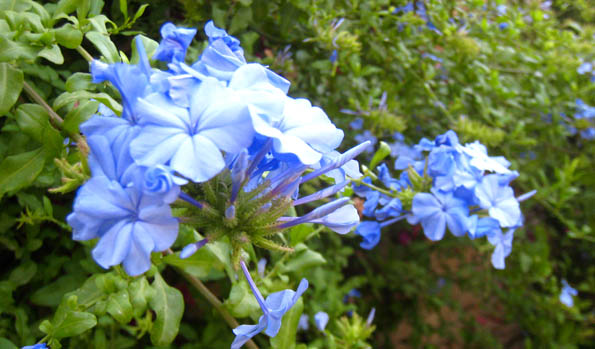 Perfect in its messiness: our choice flower for June, Plumbago

I love plumbago. It’s messy, it’s sticky, it sprawls in an ungainly fashion, and it’s now used in almost every roadside verge as ground cover to hide dusty soil. But enough of its ‘faults’.

What really draws me to Plumbago is its luminous blue; the flowers are impressive in full sun, which it thrives on, but even more beautiful at dusk when it seems to shine out of the shadows. In fact, Plumbago is an altogether very useful shrub/climber to hide and improve those awkward corners of gardens (or public highway verges), unsightly walls or barren earth.

Now to some brief Plumbago facts, without getting too academic…

What’s in its name?
Apparently, the name has something to do with lead – the Latin word for lead being Plumbum. It may have been its lead-blue flowers that inspired the name. Apparently, Pliny the Elder (23-79) believed the plant to have the power to cure lead poisoning. But Plumbago doesn’t just come in blue – it can be white, pink or purple. Was Plumbago only blue in Pliny’s time?

What’s the sticky bit about?
The flower’s inner part has hairs which secrete a sticky mucilage that is capable of trapping and killing insects. This may be to prevent crawlers like ants from entering since they don’t typically pollinate plants. The stickiness is impressive – brush against a Plumbago and expect to spend an hour picking bits out of your hair! At least it gives my cat something to do.

And a last word about it – Plumbago is happy without a drink, so very useful for Malta with our dearth of rain for the next three to four months.