You are here: Home / The Legend of the Farmhouse the Devils Built 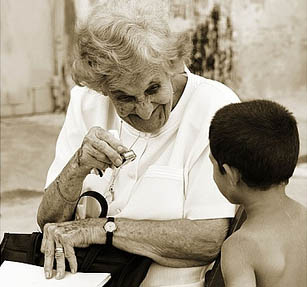 Passed down the generations - how Malta's myths & legends survive

This title of this guest post speaks for itself. Malta of old, perhaps even today, is brim full of stories, folklore, legends, superstition, tradition and ritual.

Evarist Bartolo, Shadow Minister for Education and a lecturer in communications at the University of Malta, writes what seems a short story. But one can’t help wonder that some strange truth lies behind the episode he relates.

As a child, I lived with my grandmother and aunt near the sanctuary in Mellieha in one of the row of troglodyte houses with the bedroom and the kitchen in caves. Only the sitting room was constructed at the mouth of the cave and provided the simple façade of the house.

The devils were all around me as a child. Our grandmother made sure we knew that. Every summer evening, enjoying the fresh breeze, we all gathered outside on the pavement and street after sunset, and after dozing for 15 minutes through the rosary, I would wake up wide eyed to listen to her telling us what used to happen a long time ago in Mellieha.

At night I used to cover my head with the sheet to try not to see the flickering red light cast across the walls by the slow paraffin cooker on which a coffee pot was put to brew slowly all night for the morning. I was sure that the red light was coming from a crack in the rock and I was even surer that the crack led to hell, deep within the earth and from which any moment a devil might come to take me away.

I had seen the picture of the death of the bad man: a desperate man was looking down to the right corner of the room where he lay dying and a devil was coming out of the ground to take him away. “Because he lived a bad life” my grandmother told me over and over again.

I could see the devils working hard at night, cutting the big boulders, carrying them on their shoulders and building the farmhouse. I had no doubts whatsoever that the devils which looked like black and red lizards walking upright on their hind legs, dragging their long tail behind them, were very strong and could do whatever they liked, including building a large farmhouse in a night, after all they regularly dragged millions of sinners to hell where they roasted them and plunged sharp tridents into them.

So I never dared walk to the valley to see this farmhouse. I did not even know where it was exactly. Years later I chanced upon it as a teenager walking with my family when one of my sisters yelled at seeing a huge bale of straw approaching slowly over the hill. She was sure that the wizened old farmer was in fact one of the devils who had built the farmhouse and was now carrying that straw out of the silent farmhouse in the valley. Even that day I kept away from the farmhouse and decided to look at it safely from the other side of the valley.

I could understand perfectly what I read years later in Leonard Mahoney’s ‘5000 Years of Architecture in Malta’: “Superstitious farmers who tilled their lands in the vicinity never dreamt of making a closer acquaintance and so, protected by its name as much as by its solitude, it had stood unmolested for many years.” Is it a hunting lodge or a cow house? What did this building serve for? Who built it? Even Leonard Mahoney fails to answer these questions. “The food troughs (or mangers) are enormous and very high from the floor; evidence, as the local folk point out, that the (devil) owner of this farmhouse kept enormous (devil?) cows.”

He concedes: “But mystery wraps this building. There are no armorial bearings, or inscriptions, or even graffiti …to throw light on its original purpose or use.”

My grandmother might have been right after all and while I look at the solid windowless building on my way to Mellieha Bay I have yet to visit the place and enter it.