You are here: Home / Walking with Statues 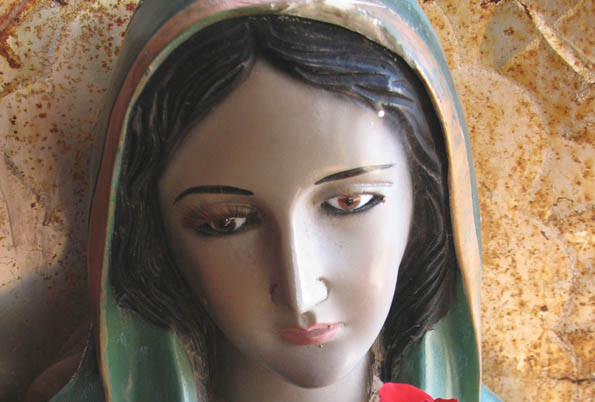 A day ago, I had a knock at the door just before 7pm. I rushed, thinking it was the postman as I was expecting an online purchase to arrive.

I opened to find, however, two late middle-aged ladies bearing a statue of the Virgin Mary.

It was about two feet high and in the regular pale, baby blue with rosy blushed cheeks and hands clasped in prayer. There was a moments pause while I did a double take, my mind now racing to whether I had any small change in my purse for some collection or other, or wondering whether they had come to preach on my doorstep. They too seemed a bit taken aback; I was obviously not Maltese and had a stunned look on my face which spelled out clearly that I had no idea at all what they wanted.

I said ‘Yes?’ with a hanging question mark. They paused, then one said ‘We’re taking the statue from house to house’. My brows furrowed and I think I said another ‘Yes?’. I was light years away still from fathoming their motive for being there or doing that. Statues are in churches, on street corners, in niches above doors and come out at village festa time. But never in my 16 years in Malta had I come across a small one going from house to house.

The ladies didn’t seem to know what to say next. The pause lingered. I decided that since they weren’t going to manage to explain, and I needed to get back to cooking, something had to be said or done to let us all get on. Since the thing wasn’t meant for my household – I was quite sure about that – I said the first thing I could think of that would end the situation, which was: ‘We’re protestant.’ They said ‘Oh’, smiled a faint smile and I closed the door.

An hour later, I was enlightened by the lady who baby sits my son. Apparently, the month of May is dedicated to the Rosary, and it’s a custom for the ‘statue’ to reside for a week with a household before passing on to a neighbour. I am still not sure if the two occurrences are linked. The lady told me that she hadn’t had the statue for over 20 years in her house, and to think I’d passed on the opportunity. With 52 weeks a year and goodness known how many houses in my large village, it’s not surprising. I think a lot of Maltese don’t know about this tradition either, and it may be something that’s common in more rural areas or villages.

So, if you’re living here, have you had the statue in your house in living memory?