You are here: Home / Must-sees: Birgu, the first home of the Knights in Malta 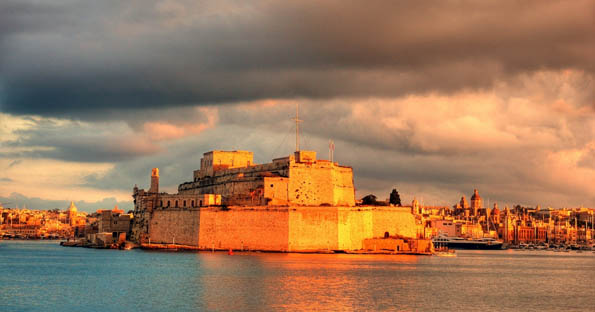 Birgu to the Maltese, and Vittoriosa to others; to my mind the most beautiful and perfectly preserved of the Three Cities which front Grand Harbour. The city was built by the Knights of St John on a peninsula, with proud Fort St Angelo at its tip, during the early- to mid-Sixteenth Century. After the Great Siege (1565) and the building of Valletta (from 1566 onwards) Birgu’s importance diminished and the Knights moved over the water to take up residence in their new purpose-built fortress city defended by huge bastions and star-shaped Fort St Elmo.

Birgu’s ancient auberges and gracious houses stood largely unchanged until the Second World War when the relentless bombing by the Luftwaffe of the Allied Fleet moored in Dockyard Creek did huge damage to this lovely old city. The tall clock tower that once stood in the main square was hit; the Auberge of Italy was flattened and many other buildings were swept away by the air raids of 1942.

So what is left to see of the city that the Knights of St John built?

The massive bastions and ditches which surround the city remain intact and in the quiet streets of the Colacchio where the Knights lived, you are surrounded by buildings representing several hundred years of architectural history.

In Hilda Tabone Street which leads off the main square there are the Auberges of Provence, Auvergne, France and Aragon (the palaces that quartered the various langues of the Knights). These narrow streets are slowly being restored and the ugly metal-framed windows which destroy the symmetry and proportions of the buildings removed.

Some buildings have been restored and used for the good of the community. For example, the Auberge of England is now the public library. The Inquisitor’s Palace is also open to the public. There is the Maritime Museum in the old Bakery on the Waterfront and exhibitions about the Knights. You can visit also the tunnels and shelters near the Main Gate which were dug during the Second World War and are now open to visitors. The museum there recalls the hardships suffered by residents of the Three Cities during the Malta Blitz.

Post-War neglect of the area and the Maltese prejudice against the Three Cities and their inhabitants means that only recently have the beautiful houses been restored and converted.

Birgu Council is encouraging the inhabitants to be proud of their city and organises many cultural activities to draw visitors to the area. Events such as Birgufest, including an evening of Birgu by Candlelight, and the Feasts of St Lawrence and St Dominic attract as many Maltese residents as tourists and allow people to enjoy the feast for the senses that Birgu offers.

It is pleasure to see that every street and alley is decorated by shrubs and flowers in pots and, amazingly, no one steals them as they might in another locality. It adds to the pleasant ambience as you wander the narrow streets. Cafes and restaurants in the main square, on the Waterfront and in quiet shadowy streets encourage one to linger and savour the atmosphere of this historic city. Spend time watching the small ferry boats (dhajjes) departing for their tours of Grand Harbour or ferrying people across to Valletta, and enjoy a coffee by the marina as you gaze across to Senglea or Kalkara on the other side. A timeless view of tranquility.