You are here: Home / God Bless the Little Children who do Holy Communion

It’s that time of year again when church steps are full of kids in white satin, hair brushed, toothpaste smiles in front of camera for their big day – their first Holy Communion. Here, Anne Muscat Scerri, whose own young daughters are going through the ritual one by one, contemplates its significance – for the kids, the parents and the local community. There’s no divorcing the religious act from the way society ticks it seems. Maltese Culture, community and Catholicism all blend and at no time more so than now.

The Catholic church is full of rites, ceremonies, traditions. Being born a protestant, I have to admit I am fascinated by it all. Living in one of the most Catholic countries in the world, the glory of it all is everywhere. Churches, chapels, saints. Christmas cribs, Easter processions. It never ends, really.

I have three young daughters. Two of them have done what is locally called duttrina (one is still far too young to go!). For a year, children aged 6 to 7 go to Catechism lessons twice a week. For a whole year they learn even more about Jesus and God and the Apostles; it’s quite mindblowing really. All the more so because they get a lot of it in school too, where in kinder and primary years religious stories are told on a near daily basis.

So no wonder my kids were very much in the ‘I love Jesus, he’s my best friend’ club while going to their twice a week duttrina lesson. Or the ‘brainwash’ as I used to call it. But yet, I have to admit I was fascinated. I don’t think a bit of bible bashing can hurt – after all, Jesus is an excellent role model. So despite the pain of going for a 45-minute lesson twice a week, I did look forward to the actual culmination of all these preparations: the child’s first participation in Confession and later on in the big celebration of accepting the Host. The child is celebrating its First Communion!

This is when the Catholic Church is at its best. Young children dress up in full bridal outfit, walk through their villages in a procession, and then endure a long mass which ends with them being offered the Host by their parish priest. Although the children were young, I still felt pride when my kids did it. Maybe it’s because (being Swedish?) I come from a society which has lost many of its traditions and rites, and I felt that this was a way to show how we are all part of a community. 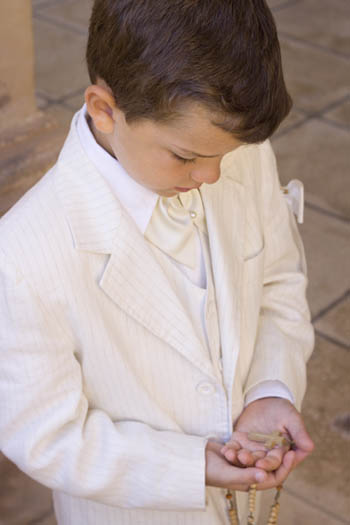 This is the real stuff: these are the passage rites the Maltese have defined in their society. These kids are on a ladder towards adulthood and they just took the first step that forever shows that they are becoming of age. I was so proud putting on my girls their fantastic outfits. I had tears in my eyes when they walked through our village with their friends. I organised a party to celebrate the occassion. And maybe that party was also a small celebration that no more do I need to go twice a week to a drab duttrina hall and sit and wait for 45 very long minutes while my daughters are singing ‘Jesus love is oh so wonderful, Jesus love is oh so wonderful…”

Photography & Text courtesy of Anne Muscat Scerri.
Anne runs Cloudberry Images and is a professional photographer who specialises in photographing children and families. She is a Swedish national who lives near Mgarr with her Maltese husband and three young daughters. For more on her work, see Cloudberry Images.