You are here: Home / A Passion for Plays & Pastries 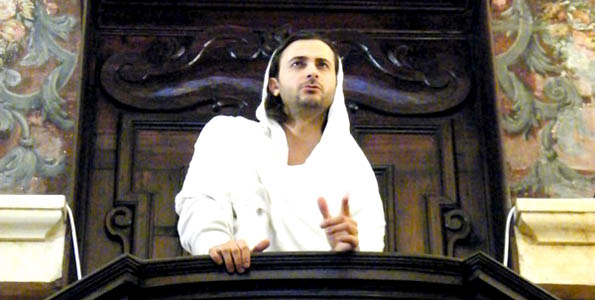 Soul searching in an Easter passion play at the Carmelite Priory, Mdina

The Carmelite Priory Museum in Mdina, a relatively recent, private museum for Malta, with a ‘pretty nice cafe’ attached, has been using its heritage assets well. Its museum, shop and eatery aside, the Priory is making the most of its vast buildings, spacious corridors, airy courtyard and church as a backdrop to arts and cultural events. It holds regular Wednesday and Saturday lunchtime concerts in its refectory, which make an ideal excuse to escape the busy tourist street outside.

At Easter, the priory is the venue for a passion play with a twist – ‘Is it Me?’ – adapted and directed by the Priory’s manager, Marc Cabourdin, who you’ll usually find overseeing the Old Priory Cafe.

Why a play and why now? Marc explains: “This is the first time we’ve taken such an initiative at the Priory. Easter is a time when many paegants are put up in Malta but most focus upon the sufferings of Jesus. ‘Is It Me?’ is different as it places strong emphasis on the originality of Jesus’s teachings with their underlying message of the importance of love as the centre of all human experience. The radicality of Jesus’s preaching is what led to him being ostracised and to him being accused of blasphemy and then executed. The plot also focuses upon his interaction with the people and gives deeper insight into the roles of Pontius Pilate and Caiaphas.”

Earlier in life, Marc spent four years in London as an actor and reading for an MA in acting and theatre, so it’s little wonder that the Priory is taking this turn.

Without giving the play away….”Is it me?”, is an adaptation of the well-known Easter play “Son of Man”, by Dennis Potter, which was originally produced by the BBC for television. It lets you see the choices that had to be made for those events which changed the face of history. The Priory’s adaptation is very much a team effort of all the cast.

Photo: courtesy of the Priory. Stefan Cheriet Busuttil in the role of Jesus.